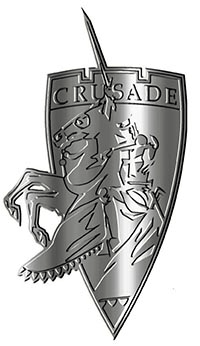 Working from a one-bedroom apartment in 1994, Billy Tucci self-published the phenomenally successful comic property Shi. At times outselling Batman and Superman, over 4 million Shi comics have been sold worldwide, along with a vast array of related merchandise, resulting in gross revenues of over 25 million dollars to date. One of the today’s most popular comics, Shi is an industry superstar that has additionally produced many blockbuster cross-over projects with some of the most well know Marvel and independent characters including Daredevil, Witchblade, and Wolverine of X-Men fame. Shi’ssuccess inspired Tucci to create and publish numerous Shi offshoots and properties such as Victoria Cross, Angle Fire, Undaunted, Battlebooks and Atomik ANGELS (with Peter Gutierrez).

In 2001 Tucci, made the leap to motion pictures with some trouble of a SeRRious nature, his filmmaking debut as writer, director and producer. The 23 minute comedy based on a now-famous 1947 hoax letter anonymously written by Navy Cross recipient Richard W. DeMott details the disposition of one unfortunate Vought F4U Corsair fighter plane and the Arkansas hillbillies who were determined to fly it. Thousands of copies of DeMott’s letter have been distributed throughout aviation circles in the years since, but Tucci’s trouble… represented its first film adaptation.

Principle photography took place in November of 2001 and May 2002. some trouble… premiered at the 2002 Long Island International Film Expo where it along with Tucci and Executive Producer Andrew Steffens was honored with the Best Short Film, (Video) award. In April of 2002, some trouble… was also selected as the winner of the prestigious Long Island Film/TV Foundation Finishing Fund Grant. some troubleis currently making the rounds of the international film circuit as a comic book adaptation was published in 2002, and a 48 page Screenplay/Photo Diary is due out June 2003.

Tucci is in pre-production for his second short film, Turn, starring Ovation Award Winner and some trouble… star Brian T. Finney and Ashley Laurence (Hellraiser, A Murder of Crows). Turn is scheduled to go before the cameras in March 2003.

Thelma and Louise Producer Mimi Polk Gitlin’s Mandolin Films ( Trapped)) recently acquired the feature film rights to Shi and Tucci, along with Kevin Bernhardt ( Art of War) is currently writing the screenplay for this martial arts laced thriller. Production of Shi – The Motion Picture is planned for 2003.

Tucci and New York Times best selling author Craig Shaw Gardner ( Batman) are presently releasing, Shi – The Illustrated Warrior. Combining the very best aspects of Gardner’s novelized verse and Tucci’s dynamic and richly detailed illustrations, Warrior is based on the legendary Shi – Way of the Warriorstory arc but with an added twist that forever alters the Shi universe. The seven issue series will ultimately be collected in hard cover format to be released in 2003.

The massive 208 page Shi – Cover Gallery, Trade Paper Back and an all new ongoing Shi series are scheduled for 2003 release, as is Gremlin Effect – Gremlinology (April) and the 196 page, The Burning Blue Illustrated Screenplay.

Shipping April 2003, Gremlinology hysterically chronicles the infamous little spirits of tool and machinery who devote their time and talents plaguing the RAF the Battle of Britain.

April showers may bring Gremlins, but May’s The Burning Blue uniquely affords readers a inside look into this modern-day retelling of Don Quixote, as a former WW2 fighter pilot, ravaged by the early symptoms of Alzheimer’s disease, and a school teacher suffering a grueling divorce find salvation through the love of flight. Tucci plans Burning… to mark his directorial feature film debut later on this summer.

Tucci’s most important work to date however, is Through the Ashes, a 32 page comic honoring the heroes and victims of 9/11.

Ashes focused on the heartfelt recollections of firefighters, police, and ironworkers present on September 11th and in the months that followed. Dedications and memorials to FDNY Lieutenants John Crisci, John Napolitano and Petty Officer Michael Noeth, a Naval illustrator and classmate of Tucci’s who was killed in the attack on the Pentagon were prominent.

A self contained Shi story written and illustrated by Tucci was also be included, depicting Ana Ishikawa (Shi) as witness to the terrible attacks on the World Trade Center. An insert color poster, Perseverance, by acclaimed illustrator Barry Orkin and Brenner Printing was also generously donated to the project.

All profits from Ashes benefit the Uniformed Firefighters Association Widows’ and Children’s Fund. Tucci also provided the cover art to Avatar Press’ variant version of Through the Ashes, with profits benefiting the United Rescue Dog Foundation.